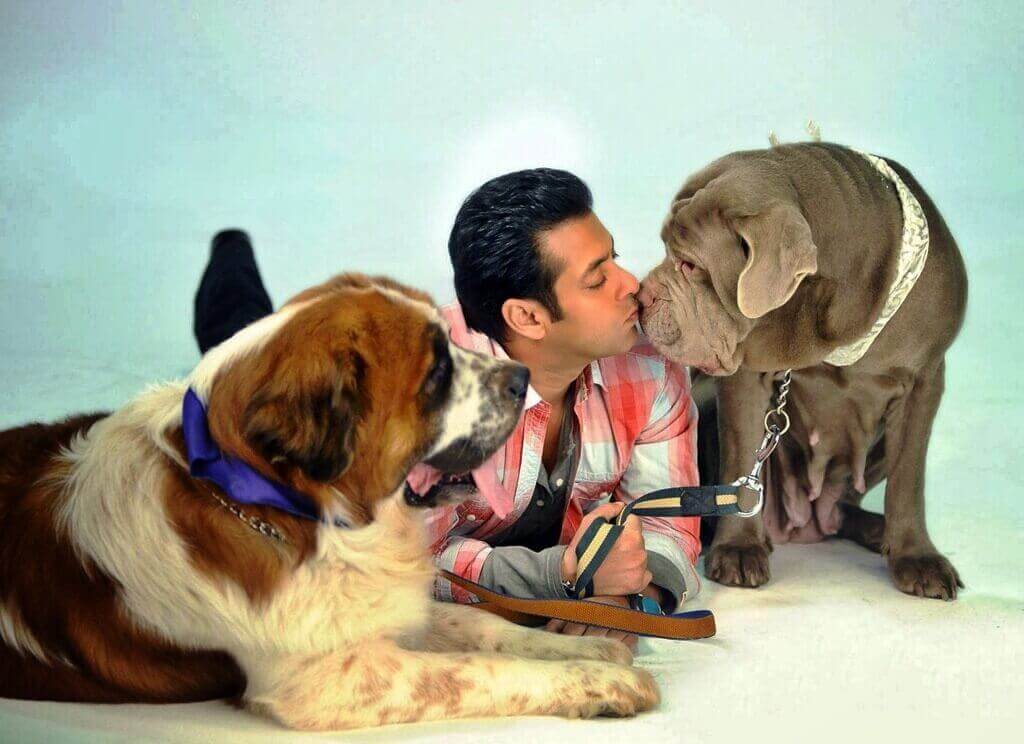 He is a big lover of animals that’s why he adopts many pets. Salman Khan has adopted many pets in his whole life. The love for the dogs in Salman Khan comes from the genes because his father Salim Khan also loves the dogs very much. Salman Khan loves doges unlimitedly and unconditionally. Salman Khan says about their dogs I learn patience and forbearance from my lovely dogs.

Pets are most loveable for Salman and they give him much happiness. Salman takes them not as dogs but as his friends. He spent his time playing with his dogs when at home. Salman is very close to his dogs and he often shares posts their photos on his social media account. once, he shared a picture of his pet dog watching Salman’s song Selfish from the movie Race 3 on television.

He has four dogs and likes them a lot. In many photoshoots Salman Khan shows his unconditional love for his dogs, he kissing them. He considers that pets are not just animals, they are the part of their family.

This kind of love we have not seen anywhere. There are a lot of pictures of Salman Khan with dogs and many more other pets. Here are a few images of Salman Khan that will be great and melt your heart in every way. He says through social media and tweets “My love says good nite sleep peacefully”. These dogs are also known for their cool temperature and also have the nature of strangeness with dominating personalities.

Salman Khan And Her Dog Name:

Salman khan dogs call myJan and my son and he calls them a great trumpet my son dead in Feb and myjan dead recently.

In 2011 Salman Khan donated his a painting with his dogs Bombay Society for the Prevention of Cruelty for the welfare and awareness about dogs. On the other hand, Salman Khan has many dogs such as   Mowgli (Labrador retriever) and Veer (French Mastiff) Sandy, Saint (St. Bernard), My love (Neapolitan Mastiff).

Salman khan dogs breed Dogue de Bordeaux and they were named like mysone and myjan. This breed is known due to its thick, muscular built. This breed is relatively short and stocky with a massive, broad head for these types of dogs. This is the best and most wanted breed for dogs that Salman khan provides to their dogs. In a few days back, Salman dog Veer passes away after all this we see the pics of Salman Khan with dog Veer. Salman Khan shares many pics of his pet veer to all of his fans and shows them how much he loves their pets. We see on social media the Salman Khan dogs images in which Salman Khan’s holding the paw of veer as well as we can the signature bracelet of Salman Khan.  Even Salman Khan was crying on the death of his dog Veer. Awareness About Dogs By Salman:

Salman Khan shares a lot of information and knowledge about the pets and especially dogs through the organization of his NGO (being human), Salman Khan promotes the rights of pets. All fans of Salman Khan love them unconditionally but Salman khan’s true love is his dog.

His soul is life in all of his pets.  There are some images of Salman Khan with his canines, which describe the love and care. Salman Khan gives them time as well as care about them. He dedicates his Chillar party to his two dogs and shows the love of Salman about dogs.

Other Stars Of Bollywood:

Same as this there are a lot of pictures of Salman dog. Salman Khan considers his day uncompleted without their puppy. Even the other celebrities of Bollywood like Priyanka Chopra, Anushka Sharma, Athiya Shett, and many more other celebrities adopt different kinds of dogs. All these celebrities love them unconditionally. All these stars cannot spend their day without their friends who love them very much. They regularly update their pics with their dogs with a different pose and fill their timeline with all these posts. This kind of love we see in Bollywood. Salman Khan is not one actor who loves pups.

Keep loving and caring…! As we know that Salman Khan is a superstar of Bollywood and all fans love him a lot, same as that Salman is a big fan of their pets and love them a lot.

After all these examples of love, Salman khan proves that he is an actual superstar. All his fans know him by a Dabang boy, Sallu Bhai, and bhajan. Salman was saying that he has learned patience and unconditionally loves his pets and they teach him how can make unconditional love.
You Can Also Read Salman Khan Cars

20 Most Influencing Best Plastic Surgery Before And After